Hello - I can't believe how it's been since I last posted! And so much has happened since then! The kids went back to school, we had Nienna's postponed birthday party, my eldest daughter turned 18 and moved into her own flat, my mum went into hospital for an op and my sister and her son came up to help me out with her and my Grandma!!! Phew!!
OK, so tonight I'll just share some of the photos from Nienna's very girly pink Cotton Candy party. I must say that this party turned out exactly how I imagined it in my head and I was so pleased with everything. I really went to town on the small details and they paid off - although I discovered that the piping bags I had were of very little use what-so-ever! I'll be looking for some tips in that department if you have any to share.
First up - I decided to get really creative in the kitchen and make my own chocolate cupcake toppers in the shape of the cotton candy and lollipops I designed for the printables. 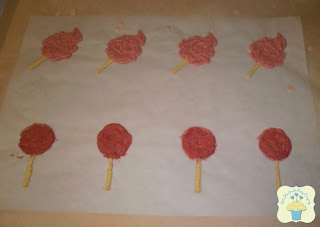 Piping with candy melts really isn't easy as they set so quickly and the oil from the chocolate was just being squeezed through the material of the piping bag!! I was a bit disappointed with these until I turned them over and this was the result I got!! 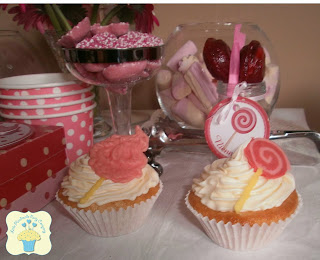 Not bad for an amateur! I also attempted cookie pops and macarons for the first time too!! I like to live dangerously! My macarons were something of a disaster, albeit a rather yummy tasting disaster! 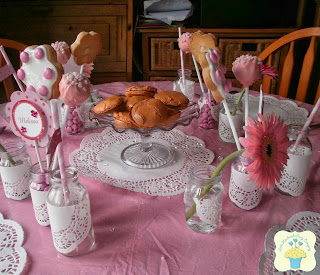 The photo below shows the table setting with a cake pop, cookie pop and name pop alongside a little vase with pink gerbera and a mini milk bottle with pink paper straw (and flag). 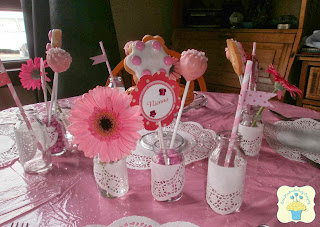 Each girl had a doily place mat and Nienna helped me to add half a small doily to each of the vases and the milk bottles too.

I think the different shades of pink flowers worked really well on the tables and instantly added a professional touch with the need for any fancy flower arranging skills which is something I don't have! 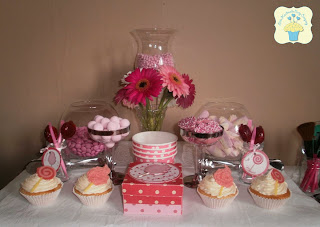 The mini Pick and Mix table was a huge success as usual. I honestly suggest having something like this at the next party you throw for your kids. It doesn't have to cost the earth as you can pick up good offers on sweets in the supermarkets and the discount stores are fantastic for sweets too. I used a couple of small fishbowl vases, one tall candle holder type glass, some plastic cocktails glasses from Poundland and little sandwich paste jars with party circle tags on. All the sweets were pink and the little pots in the middle are ice cream pots from Home Bargains. 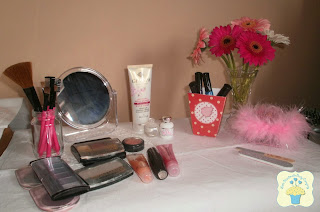 As it was a very girly party, I provided some make up from my rather pathetic stash for them to play with!! They also had nail varnish which had a little pen applicator and a stash of gems built in to the bottle!! They each got to take one of these home along with a hairbrush and these fabulous handbag gift bags which had lots of goodies inside. 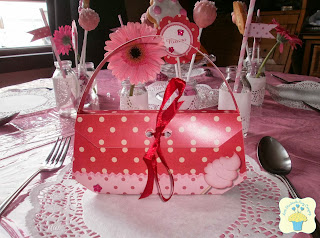 Now, no self respecting Cotton Candy party would be complete with some candy floss!! Thanks to my best friend who lent me her candy floss machine. 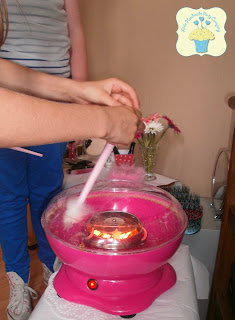 And here we have the birthday girl with her candy floss and her birthday cupcake as I didn't make a big cake - far too many sweet things to eat already! 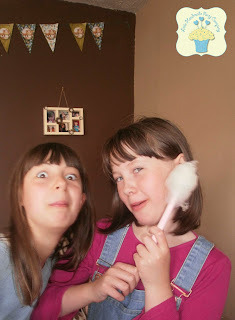 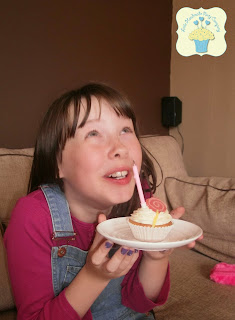 Here's a lovely photo of the girls getting stuck into their cake pops after their lunch. 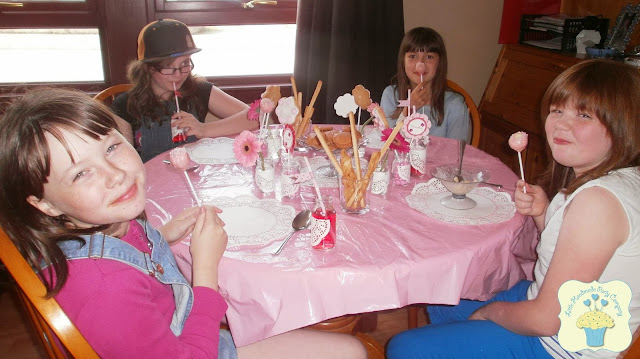 I'll leave you with other photos of the day and next time I'll share some photos from Lorien's 18th Birthday Horrible Histories party. 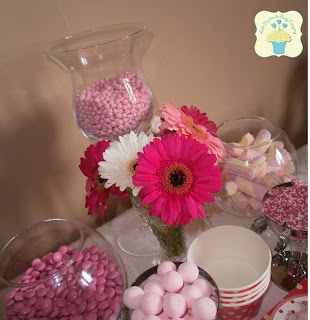 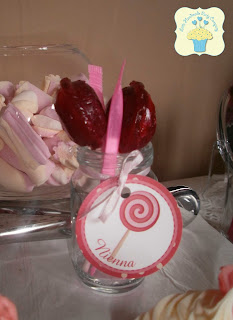 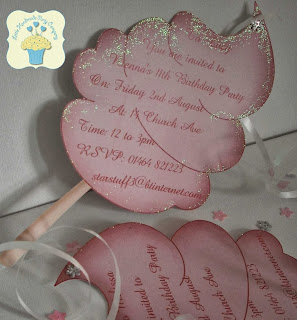